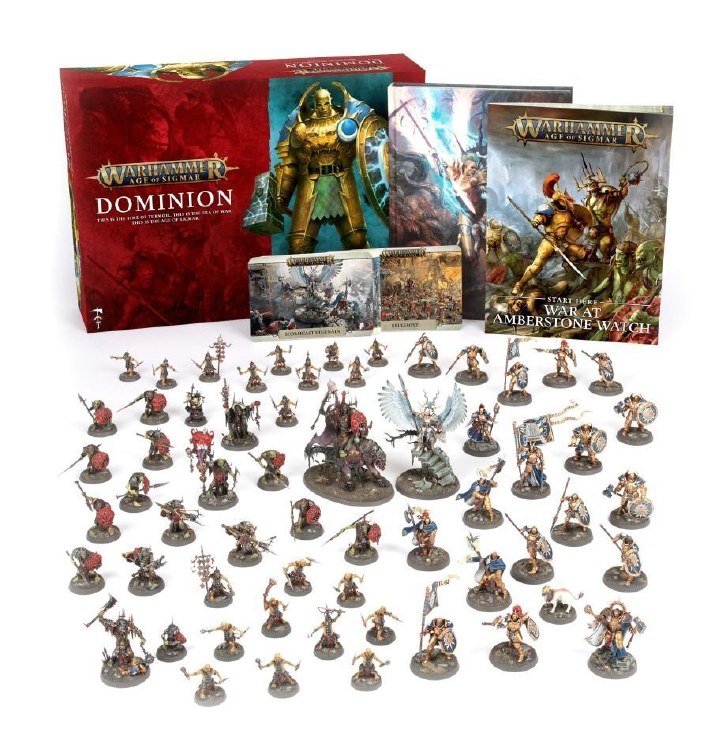 The Soul Wars are over, but a new conflict brews in the Realm of Beasts.

It is a time of great change in the Mortal Realms. A surge of life sweeps across the eight realms to force back the tide of death left in the Necroquake’s wake, and the forces of Order waste no time in laying claim to the newly rejuvenated land. But with Kragnos, god of Destruction, released from his prison and leading a vengeful rampage across Ghur, the Stormcast Eternals must fight their toughest battles yet to safeguard the pioneering Dawnbringer Crusades.

If you’re looking to plunge headfirst into the new edition of Warhammer Age of Sigmar, look no further than this glorious boxed set. Warhammer Age of Sigmar: Dominion comes complete with two powerful armies, pitting the reforged Stormcast Eternals against the emerging threat of the Kruleboyz – cunning and deadly orruks native to the swamps of Ghur. The set also includes a Dominion-exclusive version of the Warhammer Age of Sigmar Core Book, which provides extensive background information on the game’s fantastical setting as well as a full set of rules for playing thrilling games with your Citadel miniatures.