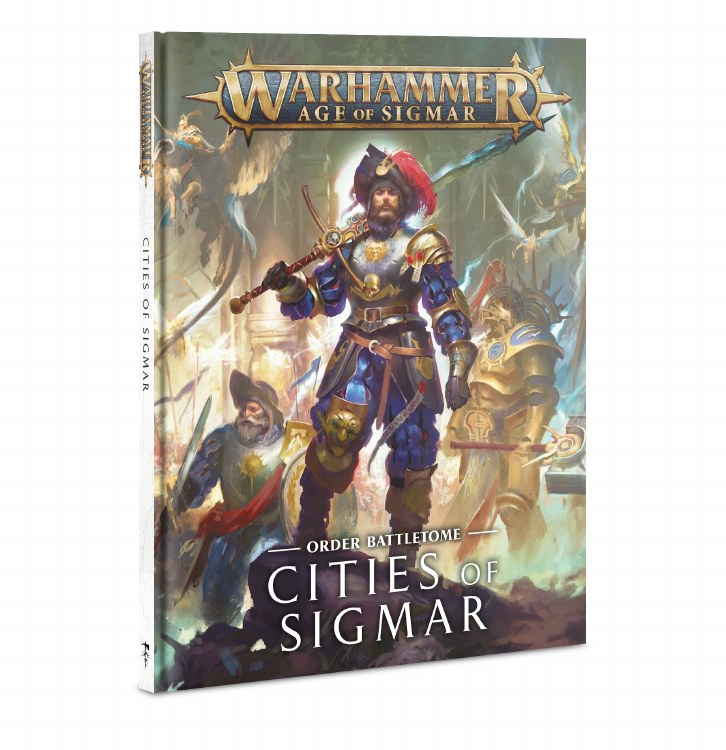 The Cities of Sigmar are blazing strongholds of light and hope amidst the deadly wilds of the Mortal Realms.

Battletome: Cities of Sigmar is your guide to the mightiest bastions of Order in the mortal realms – and the grand armies of humans, aelves and duardins that bravely fight to defend them. Inside, you'll discover just what life is like for the Mortal Realms’ “ordinary” inhabitants – the countless sub-cultures, guilds and tribal groups that band together to fight for Sigmar and the pantheon of Order. Rich art, lore and seven short stories penned by renowned Black Library author Josh Reynolds bring the world of the Cities of Sigmar to life.

Meanwhile, a vast set of allegiance abilities and faction rules allow you to field powerful combined forces of Order units themed around the seven most famous Cities of Sigmar. Perhaps you’ll harness the myriad war machines of the Greywater Fastness, or field a rapid-strike force from Tempest’s Eye – the choice is yours, and with warscroll battalions, artefacts and dozens of warscrolls to choose from, the possibilities are endless. What’s more, you'll find loads of top painting tips, colour schemes, bespoke missions, Path to Glory rules and more – this is the ultimate resource for any Cities of Sigmar collector!